Cyclist of the Month – Melissa Roselman 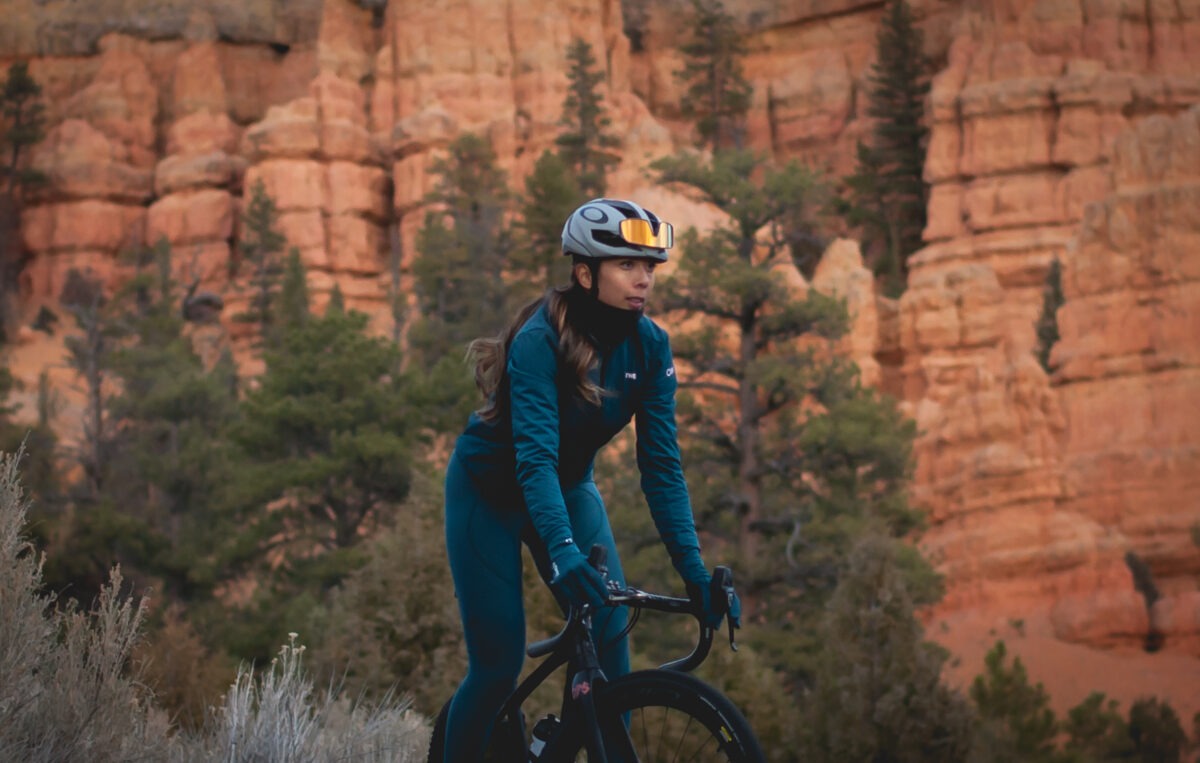 When we first chatted with Melissa she was in the middle of a workout, which says more about her than anything else we could share in an introduction and truly set the tone for our conversation. Melissa started playing soccer when she was four and made the Missouri Olympic Development team when she was fifteen. She was in her prime and on top of the world when disaster struck. During the first small practice of the season, her knee blew out. Melissa was gracious enough to share her story of recovery, growth, and rebuilding a community from the ground up through bicycles.

Pedal Movement – So it sounds like you’ve been an athlete your entire life. What drew you to athletics in the first place?

Melissa Roselman – My journey as an athlete started very young. I have an older brother who was really involved in ice hockey. He was my hero and I wanted to be just like him. I would go to all of his hockey practices, games, and sometimes even his sprint clinics—always watching and admiring his athleticism. When I was 4 years old, I told my parents that I wanted to play hockey too. Instead, they enrolled me in soccer camps and the rest is history.

PM – When you tore your ACL at 15 you said it was like losing the love of your life. What was that experience like for you?

MR – Since the age of four, my whole life revolved around soccer. I did it all. I played competitive indoor during the winter season, outdoor rec and club in the spring and summer, and futsal on the side. [editor’s note: We had to google it.] At one point I can remember being on three different teams at once, going from one practice to another.

Soccer was my everything. It was my persona. It was my identity. My clothes. My routine. My diet. Starting at age ten, I would do 100 sit ups a night and run miles around the neighborhood just to stay fit for soccer. It was an obsession and I knew it made my parents proud. They told me that it would one day help me get to college, so it became my dream and aspiration to get that full-ride scholarship.

At fifteen, I was peaking. I was on the 2nd best club team in the entire state of Missouri and I had just made the Missouri Olympic Development team. I had university scouts asking if I would be interested in playing for them. I was on top of the world. Then in a small practice, the first of the season, my knee blew out.

My knee had swollen up with blood, but I still couldn’t accept that anything was wrong. I kept trying to walk it off. I remember the car ride home. The sun was setting and both my dad and I were very quiet. He finally said, “it’s okay, Missy. We can find you another hobby to love.”

I was completely destroyed.

One surgery stretched into two surgeries. I cried for days. I went into depression. The scouts were gone and my body changed drastically. I went from 116 pounds to 84 lbs in a matter of weeks. It was like my life stopped, and the world kept turning without me.

PM – That sounds unimaginably difficult. What was the process of learning to accept letting go of your soccer dreams?

MR – Letting go of soccer didn’t happen right away. I continued to play once I recovered, but I was never as fast as I used to be. My speed was one of the things that made me valuable. Before surgery I could out sprint any girl on the field. After surgery….I was on the same playing field with everyone else.

One positive was that because I lost my speed, I developed my footskills. I played mostly for fun in college. I was always on the field or at the gym playing indoor with the guys. There were times where I would even practice with the University of California Irvine men’s club team with my friends, which is where I blew my knee out again.

I had a 3rd surgery. I still played for the UCI women’s club team, but I knew that my career was coming to an end. Letting go was a hard process. There was a lot of denial, but after graduating from college and working my first jobs, I accepted that that part of my life was over.

PM – After your third surgery you leaned into running—what drew you to running?

MR  – This goes back to that denial thing. I kept telling myself “You’re ok you’re ok.” So I convinced myself that I could run and it would be good for me. I was still pretty fast and had a lot of stamina. Without the physical contact from soccer, my knee would be ok right? Plus I just enjoyed being outside and active. Well running ultimately made my knee worse. I can still run now, but the knee pain at the end of the week isn’t worth it.

PM – What eventually flipped the switch on cycling for you, and how did getting into cycling help you navigate what sounds like one of the lowest points in your life?

MR – I was lost. I didn’t know who I was anymore because I had spent so many years focusing on other people. I never really understood how to be single either, and I found myself with a lot of extra time on my hands.

When I moved to Long Beach in 2017, I had no one. I just had a bike. I’m not one to drink or club or go to bars, so I would literally just pass my time riding on the beach bike path. I started exploring different bike scenes and came upon a page for the Eldo Race Series. I rode my bike up the river path one day to check it out.

I met a few people and I started getting invited to things. I remember being at a Moonlight Mash when I heard someone say, “let’s do a century this weekend” and having no idea what that meant I said, “Let’s do it.”

Everyone looked at me like I was crazy, because you could obviously tell that I didn’t know how to fully ride my bike yet.

That weekend, someone formed a group ride and we rode from Long Beach to Dana Point and back, which isn’t quite a century, BUT it was by far the longest ride I had ever done. I felt so good after the ride that I knew I had to keep doing this thing that felt so inclusive and encouraging. It was bringing me out of my shell and forcing me to be social and learn new things about myself and my body. That first group ride was the spark.

PM – You said you got a bike in 2015 but were intimidated by the culture and gear required to make the dive into becoming a “cyclist.” In hindsight, what do you think the culture could have done better to be more welcoming?

MR – Well, I don’t know if it was the fault of other cyclists. For the most part everyone was welcoming, but I could tell that they were masters at a craft and I was a pure beginner.

YES it was extremely intimidating but remember, I was also in a relationship at the time. It’s really hard to tell someone that you have this crazy new passion and need to spend $2,000+  to get started. The person I was with was not very accepting of the idea that I would be riding for hours and spending less time with them, which I understood at the time. So I never fully invested into cycling until I was single and could do exactly what I wanted.

PM – Does cycling fill a similar space that running did? Or even that soccer did?

MR – Even though they are different sports, the passion for excellence and personal growth is still there. My husband teases me a bit and tells me that if I am interested in something, I fully invest myself and go head first into it (duh, I never half-ass anything.)

I have a million hobbies that I try to juggle, but the most important one is my fitness. If I can’t play soccer, I’ll run. If I can’t run, I’ll ride my bike. If it’s too damn windy or cold to ride, I’ll be at the gym. My focus in life is to be healthy and happy regardless of what sport I do.

PM – You mentioned your motivation for staying in shape and pushing yourself as an athlete has changed. Can you talk about that shift?

MR – When you’re young, you’re still learning who you are. I was heavily influenced by the idea of getting a college scholarship because I knew it would make my parents proud. And as a kid, that’s all I wanted, so I pushed myself for the sake of pleasing others.

When I grew older, I started to realize that my parents were proud of me no matter what path I chose. I had such a hard struggle getting to where I am now, and they have been nothing but amazing in giving me the encouragement and love to get here.

And so in life, we all have decisions to make. I had the decision to continue to play soccer, or to quit. What I found out about myself, is that quitting, well, it doesn’t feel particularly good. Training and exercising were the foundations of who I am. It’s wired into my DNA to be active. I even struggle sitting still sometimes. So the motivation to move and stay in motion comes from me. It comes from the self love that I have for myself and the love that I have for my craft, which is my personal fitness.

Every training session, every ride, every meal has a purpose. It’s meditative now and it’s something that I do for myself, so that I feel happy.

PM – What advice would you give someone who is intimidated to get into cycling?

MR – If they’re intimidated? Don’t be. We all started from somewhere.

I spent my first year on a bike that was WAY too big for me, wearing loose fitting kits. The first year was a cool year, because everything was a learning process. I can still remember falling in my driveway learning how to clip in.

If you’re scared, always remember it’s not about being the best, the fastest, or the coolest looking rider. It’s not about having the coolest bike or the spiffy accessories. It’s about self love and self growth.

Everyday I watch people riding their bikes on the bike paths and around Long Beach, and to this day, I have never witnessed someone unhappy on a bike. Life is too short to be afraid to make the right decisions for ourselves. Just go ride!

PM – Can we expect to see you out racing once COVID calms down and races start happening again? 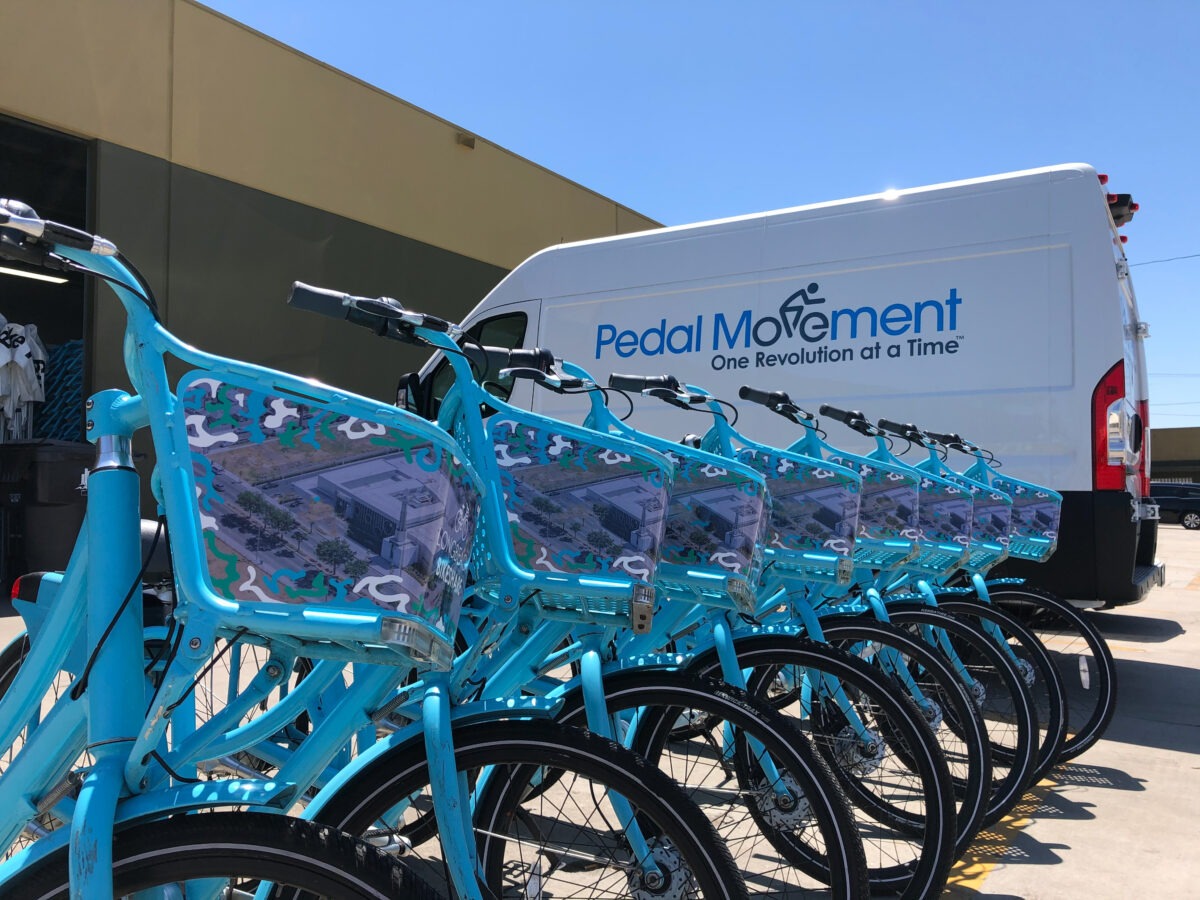 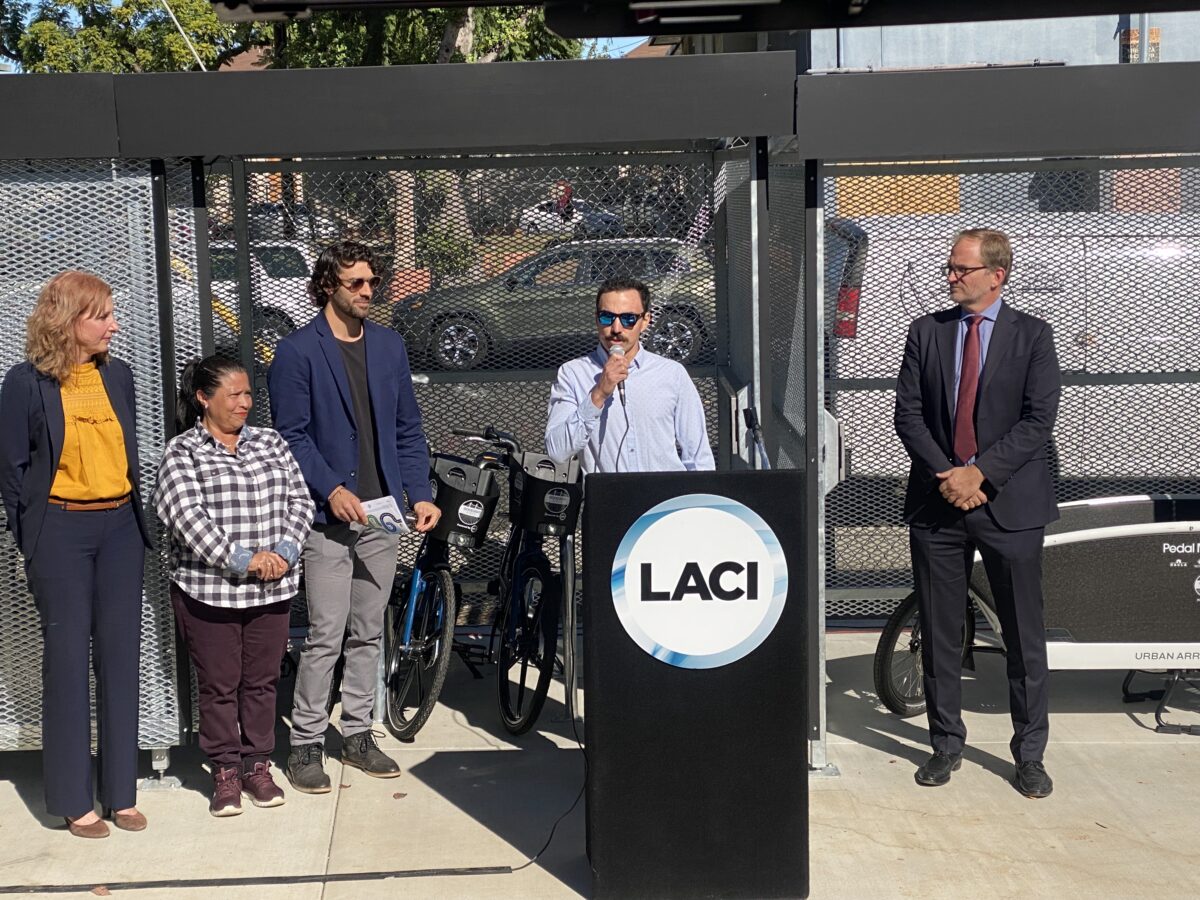 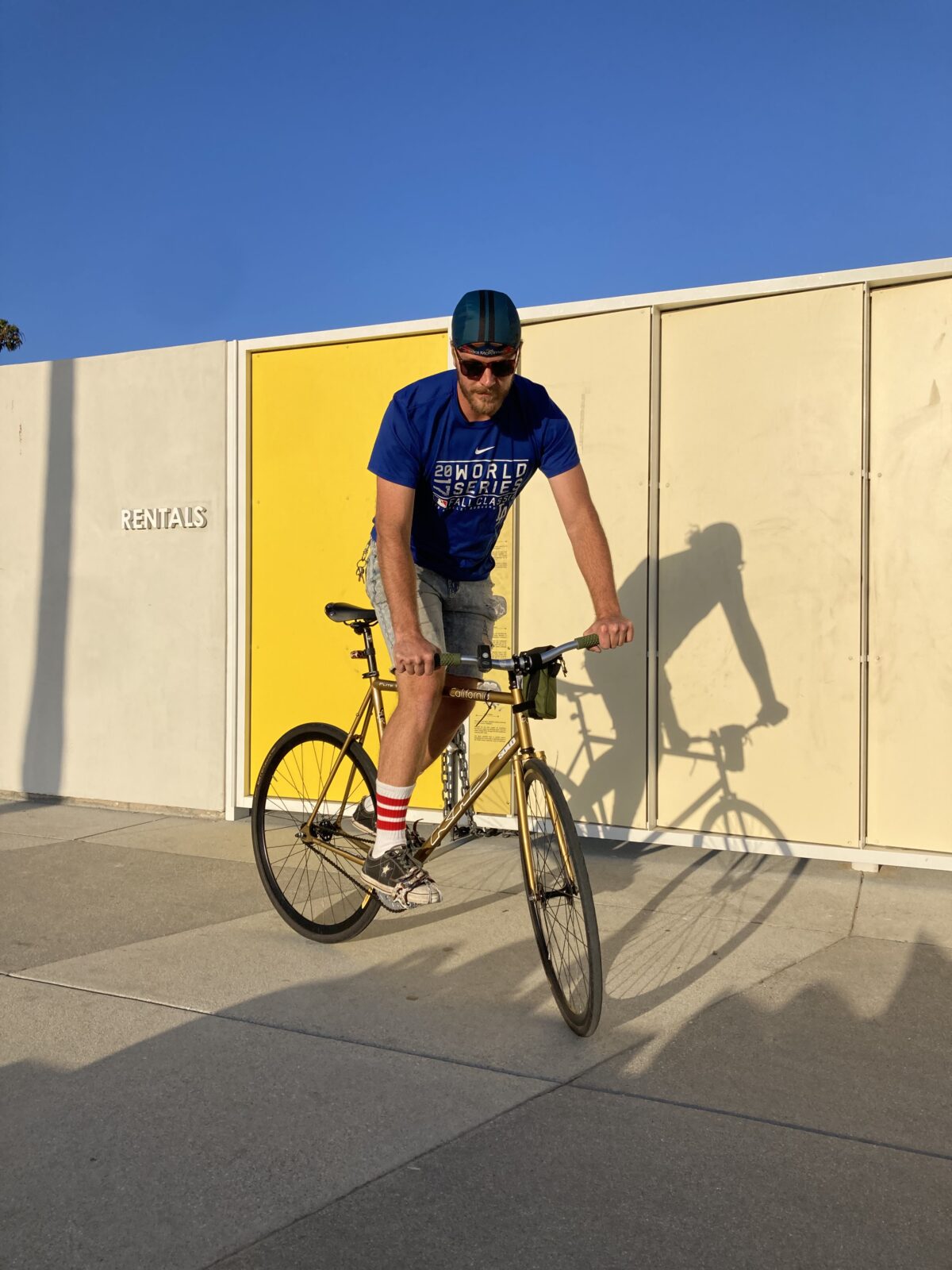